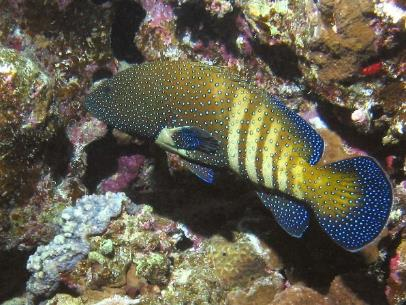 LOCATION: Found in South Africa and east to French Polynesia and the Pitcairn group. It is also present in northern Australia, Lord Howe Island, and Japan, and has been introduced to the Hawaiian Islands.

HABITAT: The species is extremely widely distributed, occurring in warm waters. It makes use of a variety of habitats but prefers the exposed fronts of reefs, at depths of up to 40 m.

DIET: Like most groupers it is a meat eater that preys on small fish.

FACT: Its species name comes from its resemblance to the "hundred staring eyes" of the monster Argus in Greek mythology. 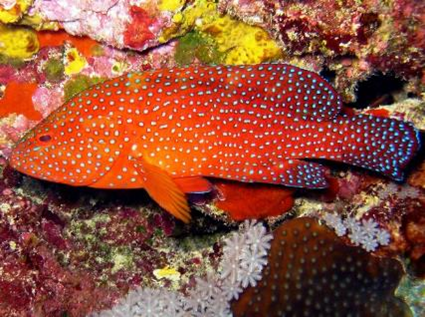 LOCATION: The coral hind is widespread throughout the tropical waters of the Indo-West Pacific area, including Durban, South Africa, the Red Sea, and Line Islands.

HABITAT: A reef-associated species, the coral hind is found in the clear waters typically in the more exposed portions of reef habitats from depths of 7-492 feet (2-150 m).

FACT: This fish is a solitary predator that hangs out among the rocks waiting for prey. 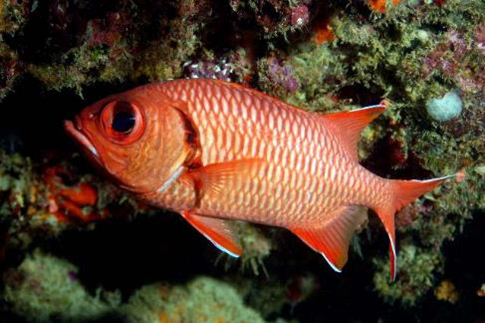 LOCATION: Myripristis berndti is widely distributed, occurring in the Indo-Pacific from East Africa, South Africa and east to Indonesia and the Philippines, north to the Ryukyu Islands, south to the Great Barrier Reef , Norfolk and Lord Howe islands, throughout Melanesia, Micronesia, Polynesia and to Clipperton, Cocos and the Galápagos Islands . The depth range for this species is 3 to 160 m , but is more common from 10 to 30 m.

DIET: They usually aggregate in mixed-species and mainly feed on plankton.

FACT: The body is oval and laterally compressed and the scales are quite large. 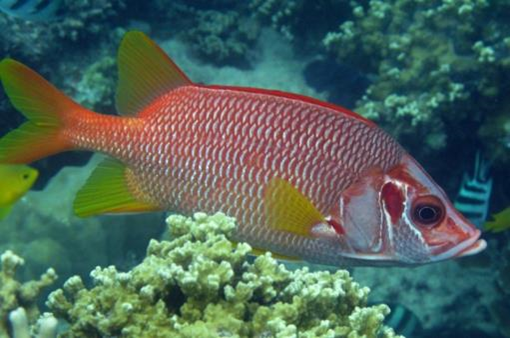 LOCATION: It is widely distributed in the Indo-West Pacific, ranging from the Red Sea and East Africa to the Hawaiian Islands and Pitcairn Islands, north to southern Japan and the Ogasawara Islands, south to Australia and New Caledonia.

HABITAT: Sargocentron spiniferum is a solitary, benthopelagic species that inhabits a variety of reef habitats from reef flats to lagoon and seaward reefs and is found under ledges where it shelters during the day. Juveniles of this species inhabit shallow protected reefs .

DIET: They feed nocturnally on smaller fish, crabs and shrimps.

FACT: This is the largest of the Squirrelfish.Their colour can change greatly in different lights and if threatened.Almost white in the day and bright red at night. Some of this family have venomous spines. 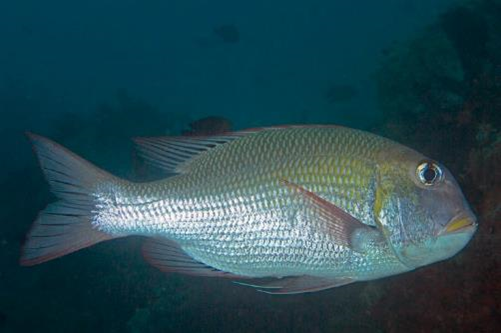 LOCATION: Monotaxis grandoculis is widespread in the Indo-West and Central Pacific from Hawaii and southeastern Oceania to the East Africa and Red Sea and from Australia northwards to Japan. It is typically found at depths of 3-60 m, but has been recorded to 150 m). This species has recently invaded the Mediterranean Sea through the Suez Canal.

HABITAT: Monotaxis grandoculis is usually found on coral reefs, often on the sandy periphery or in sand and rubble areas.

DIET: They feed on invertebrates and worms.

FACT: Most members of Lethrinidae are able to rapidly switch on and off dark mottled patterns, spots and bars to deter predators. 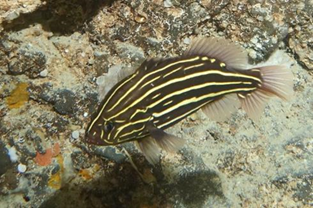 LOCATION: Grammistes sexlineatus ranges from South Africa and the Red Sea to the Marquesan and Mangaréva Islands, north to southern Japan, south to New Zealand and Lord Howe Island.

HABITAT: They inhabit coastal waters over corals and rocky substrates and usually hides beneath ledges and small caves during the day.

FACT: They have a soapy toxin in their skin that releases when stressed to deter predators. 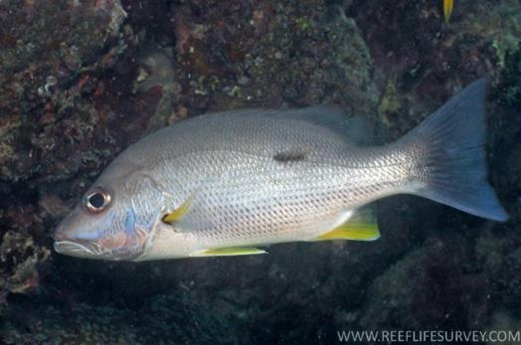 LOCATION: Lutjanus monostigma is widespread in the Indo-Pacific from the Marquesas, French Polynesia and Line islands to The Persian Gulf and Red Sea, south along East Africa to Sadwana Bay, South Africa, and from Australia to the Ryukyu islands.

HABITAT: This reef-associated species inhabits coral reef areas, usually close to shelter in the form of caves, large coral formations and wreckage . This species is characteristic of reef species observed in American Samoa, and is sometimes abundant in areas with macro and coralline algae cover.

DIET: They are nocturnal predators that mainly feed on fish, but will eat crustaceans, gastropods and cephalopods.

FACT: They show a small black side spot (hence the common name) just below the dorsal fin. This spot usually disappers with age. 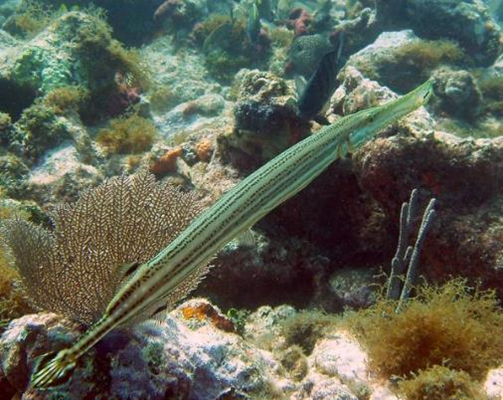 COMMON NAME OF THE SPECIE: Trumpetfish

LOCATION: Aulostomus maculatus is distributed in the tropical western Atlantic Ocean, from the Bahamas and Bermuda, around south Florida, in the Gulf of Mexico from the Florida Keys, offshore banks and reefs in the northern Gulf and off Mexico from Tuxpan along the Yucatan Peninsula to Cuba, throughout the Caribbean Sea, and along the coast of South America to St. Paul's Rocks off Brazil. It occurs between 2-50 m depth.

HABITAT: It is a shallow-dwelling coral/rocky reef fish that lives in clear water, coral habitats and gorgonian and seagrass beds.

FACT: Although Trumpetfish can be found in various colours, because of their ability to change colour at will, there is in fact only one genus with two species, one Pacific and one Atlantic.