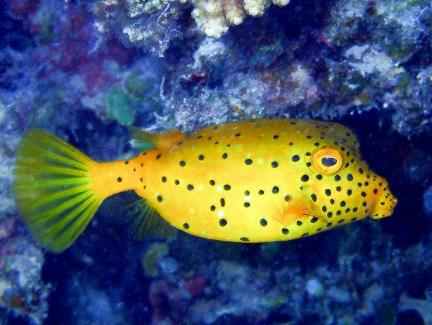 LOCATION: Found in reefs through out the pacific ocean & indian ocean as well as the south eastern atlantic ocean

HABITAT: Found in the shallower & warmer Parts of the reefs

DIET: Feed all kinds of live and frozen foods. Best to feed small amounts several times a day. We generally feed squid, shrimp (the same kind people eat), mussels, and all kinds of chopped up fish.

FACT: This is a juvenile Polka-dot Boxfish, Yellow Boxfish, or Blue-spotted Boxfish. It's so cute! It's amazing that this little fellow will grow up to be an adult thats 18 inches (45 cm)!If stressed, the Cubicus Boxfish releases a poisonous substance, called ostracitoxin, from its mucous glands which will kill other fish in the tank very quickly. 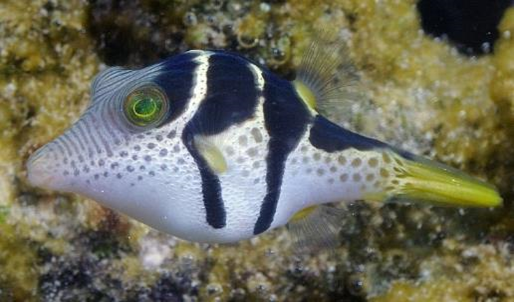 LOCATION: Canthigaster valentini is known from the Red Sea and East Africa to Micronesia and the Tuamotu Archipelago, and Australia to the Pacific coast of southern Japan, South Korea and the coast of Taiwan.

HABITAT: Canthigaster valentini is a reef-associated species found among coral heads and rocks of sub-tidal lagoons and seaward reefs at depths of 1 to 55 m. It is also found in seagrass beds, and has been known to settle on and associate with artificial reefs.

DIET: They will also eat the inhabitants of reef tanks (e.g., decorative crustaceans). You should feed your sharpnose puffer a diet of chopped seafood, crustaceans, mysis shrimp, and frozen food for marine fish. Puffers often feed on algae in the tank

FACT: Puffer fish are so named because of their ability to inflate their bodies as a defense against predators. Puffers inflate their bodies by filling it with air or water. This causes them to appear larger and it also makes them harder for predators to swallow.It is highly poisonous to eat LOCATION: This reef fish is found in Indo-Pacific waters, including the Red Sea.

HABITAT: Canthigaster margaritata is a reef-associated species which is common in tide pools near reefs and in shallow reef areas. It is also known to colonize artificial reefs. This species is a facultative corallivore, ingesting skeletal material and including soft coral in its diet. The filefish Paraluteres arqat mimics this species in the Red Sea

FACT: Also known as Pufferfish, Sharp-nosed Puffers, Margaritata Pufferfish, Red Sea Pufferfish and Spotted Sharpnose Puffer. Found singly or in pairs in protected lagoons, channels, reef flats and tide pools. The bodies of Pufferfish are covered in a toxic mucus, if the skin or flesh is consumed it can be fatal to humans.

HABITAT: The Humpback Turretfish is usually found in deep offshore waters over coastal slopes and sheltered muddy and sandy substrates. It is also occasionally found near shallow algae and seagrass beds with silty rubble substrates, and areas of part-destroyed coral reefs, and rocky outcrops.

DIET: It Feeds on a wide variety of invertebrate & algae

FACT: Tetrosomus gibbosus, commonly called camel cowfish because of the hump on its dorsal keel. Other common names include helmet cowfish, humpback turretfish and thornbacked boxfish.Like other boxfish, its flesh is poisonous 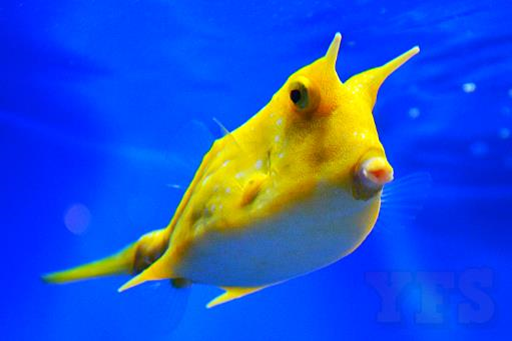 LOCATION: Cowfish, Longhorn Cowfish, or Long-horned Cowfish are found in the Indo-Pacific: Red Sea and East Africa to the Marquesan and Tuamoto islands, north to southern Japan, south to Lord Howe Island.

HABITAT: Inhabits inshore on coastal muddy or sandy habitats in still bays, and commonly found in harbours and estuaries.Found in weedy areas near rocks or reefs. Juveniles often near river mouths and in brackish water.

FACT: Probably the most well known of the boxfish! The Cowfish, Longhorn Cowfish, or Long-horned Cowfish can be seen in almost every public aquarium. They are hardy and they love to eat!