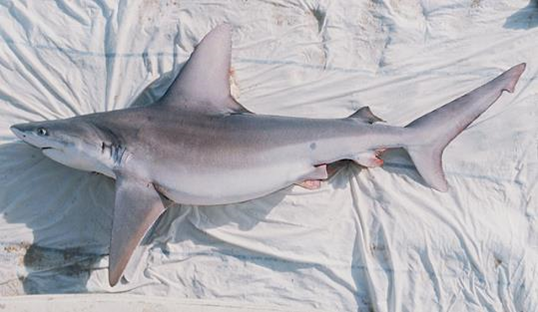 LOCATION: native to the Atlantic Ocean and the Indo-Pacific.

HABITAT: Is commonly found over muddy or sandy bottoms in shallow coastal waters such as bays, estuaries, harbors, or the mouths of rivers, but it also swims in deeper waters (200 m or more) as well as intertidal zones. Found in tropical to temperate waters worldwide 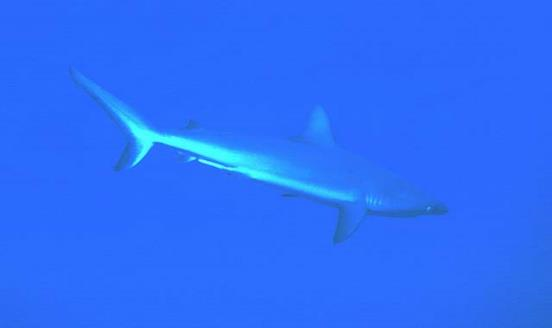 LOCATION: The Grey Reef Shark is a widespread species occurring in the central Pacific and westwards to the eastern Indian Ocean.

HABITAT: The species is found in clear tropical waters often from 10 m to more than 50 m around coral reefs, particularly near drop-offs and passes of fringing reefs. It is more common at ancient atolls, and less common at high profile islands with extensive human habitation, or in turbid continental waters.

DIET: Grey reef sharks feed mainly on bony fishes, with cephalopods such as squid and octopus being the second-most important food group, and crustaceans such as crabs and lobsters making up the remainder. The larger sharks take a greater proportion of cephalopods.

FACT: Grey reef sharks are active predators and true carnivores (meat-eaters). They hunt and eat different types of fish, crabs and squids. Grey reef sharks have excellent sense of smell. They can smell tuna fish in 10 billionth part of the water. Grey reef shark shows specific behaviour when it is threatened. It swims side to side with arched back, raised head and dropped pectoral fins. Ovoviviparous, Gestation period is of 12 months 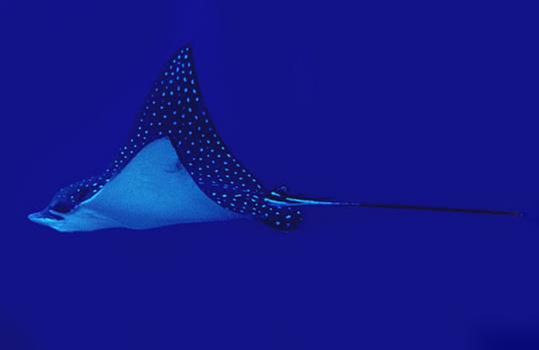 LOCATION: it is found globally in tropical regions, including the Atlantic, Pacific and Indian Oceans.

HABITAT: Coastal and semipelagic over the continental shelf from the surface to 60 m depth.

FACT: Their whip like tail can grow two to three times the length of their disc shaped body. They do not have any caudal fin. These fish are sometimes captured as game fish. Ovoviviparous.

LOCATION: The Zebra Shark is found in inshore waters of the continental and insular shelves of the Western Pacific and Indian Oceans.

HABITAT: The Zebra Shark occurs in tropical and subtropical, shallow inshore and offshore waters, often found on and around coral and rocky reefs and on sandy plateaus near coral, at depths down to at least 62 m. They are often observed resting on the bottom as well as swimming near the surface as both juveniles and adults.

DIET: Zebra sharks are omnivorous animals but tend to have a more meat-based diet. Zebra sharks feed on small fish, crabs, shrimp, snails and other small invertebrates along with squid and sea snakes which they forage for in the coral reefs.

FACT: The long tail of zebra shark allows it to be more agile in the water. This allows them to swim quickly and catch their prey and run from their hunters. The dark color allows them to hide from their prey and predators. As zebra sharks have intense patterns, they are included in the group of carpet sharks, as the patterns on a zebra shark look like the designs of a carpet. They have tail fins on their body that are able to grow as long as their body. Ovoviviparous. 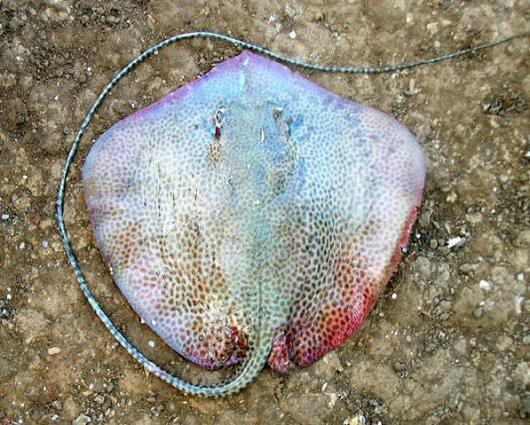 DIET: These rays are bottom feeders for the most part. Their diet consists primarily of small fishes and a variety of invertebrates including crabs, bivalves, worms, shrimps, and sea jellies. They use their pectoral wings to uncover hidden prey.

FACT: The honeycomb stingray gets its name from its intricate pattern. This pattern helps to camouflage it from sharks and other predators that may try to hunt it from above, as the stingray mostly rests on the sandy bottom of lagoons and shallow waters. Ovoviviparous. 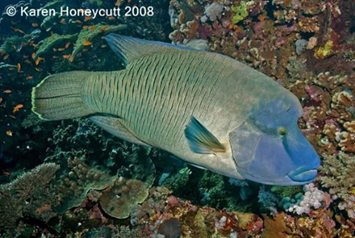 LOCATION: The Humphead Wrasse is widely distributed on coral reefs and inshore habitats throughout much of the tropical Indo-Pacific, from western Indian Ocean and Red Sea to southern Japan, New Caledonia and into the central Pacific Ocean. In Australia, it occurs on offshore reefs of north-western Australia and the Great Barrier Reef.

HABITAT: Small post-settlement humphead wrasses were found in a species of seagrass, four species of hard coral and soft corals. After settlement, juveniles and adults live associated with reef or near-reef habitats of seagrass beds and mangrove areas, with juveniles typically inshore and the largest individuals found in deeper waters of outer reefs or lagoons

DIET: The Humphead Wrasse feeds on mollusks, reef fish, sea urchins, crustaceans, and other invertebrates. They can even eat toxic sea hares, boxfish, and starfish

FACT: This fish is immune to the toxic spines of animals like the crown-of-thorns starfish. Color of the body depends on the species, habitat, age and gender. Wrasse can be white, yellow, orange, red, purple, blue, green, grey, brown or black and covered with numerous bars, stripes and marking 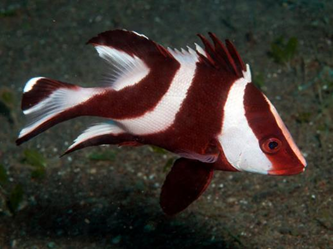 LOCATION: Lutjanus sebae is found in the Western Pacific and Indian Ocean from Australia and New Caledonia to southern Japan and westward to East Africa and the southern Red Sea.

HABITAT: This reef-associated species occurs in the vicinity of coral or rocky reefs, often over adjacent sand flats and gravel patches.

DIET: Carnivore - feeds on fishes, crustaceans such as crabs, stomatopods, shrimps and cephalopod.

FACT: Juveniles often shelter amongst sea urchin spines until large enough to venture out to feed out in the open. 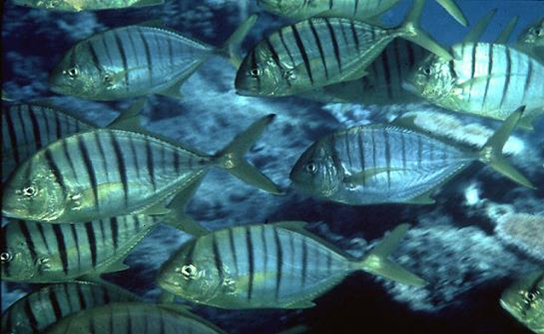 LOCATION: Gnathanodon speciosus is distributed throughout the Indo-West Pacific from South Africa to the Red Sea eastward to the Hawaiian Islands, the Austral Islands, Marquesas and Easter Island, north to the Ryukyus, south to Australia,. In the Eastern Pacific Ocean, this species ranges from Baja California Sur to northern Peru.

HABITAT: This species is an epipelagic species that occurs inshore and found over rocky reefs, deep lagoons, and seaward reefs.Juveniles often occurs in estuaries.

DIET: They feed on crustaceans, small fish and invertebrates. The larger fish hunt other fish and the smaller fish eat zooplankton.

FACT: Juveniles found in the tentacles of jellyfish, but as they grow they display piloting behaviour with much large fish probably to gain protection from their predators. 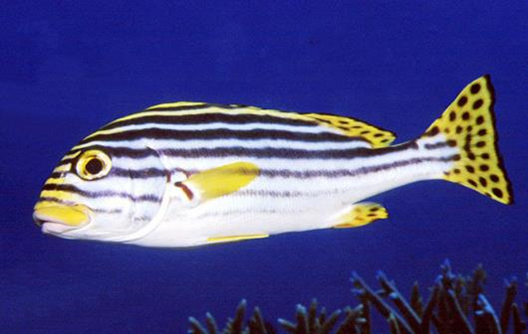 LOCATION: Oriental Sweetlips are native to the Indian Ocean and the western Pacific Ocean.

HABITAT: This species can be found on both coral and rock reefs at depths from 2 to 25 m.

DIET: They feed on benthic crustaceans, fish and invertebrates.

FACT: In some areas of the world 'Grunts' are better known as 'Sweetlips' distinguished from other species by their very large rubbery lips. 'Grunts'because they "grunt," the grunting sound is produced by their flat teeth plates rubbing together and this is amplified by their air bladders. 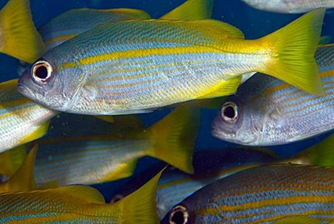 LOCATION: Lutjanus lutjanus is widespread in the Indo-West Pacific from the Solomon Islands to East Africa and from Australia to southern Japan. This species has also been identified from Samoa, Lakshadweep and Tonga and Wallis Island.

DIET: They are nocturnal predators that mainly feed on fish, but will eat crustaceans, gastropods and cephalopods. Some smaller family members eat zooplankton.

FACT: Most Snappers live in moderate depths, however there are a few that live much deeper. Juveniles found on inshore reefs. 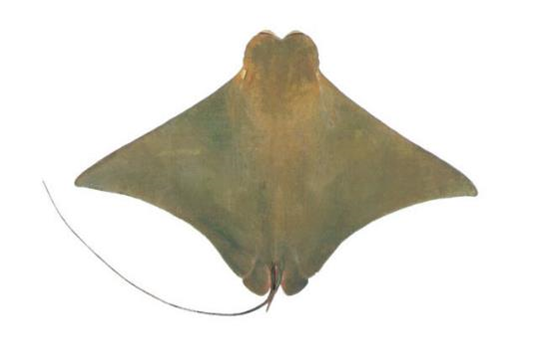 LOCATION: Complete geographic range is not well defined, but the species is widespread throughout the Indo-West Pacific and mostly found in Thailand, Indonesia and Southern China from South Africa to Japan.

HABITAT: Inshore over continental and insular shelves. Recorded over muddy and sandy bottom and shallow estuaries, and in coastal bays.

FACT: They swim together to stir up the sediment which exposes the clams, oysters and crustaceans which they feed upon.