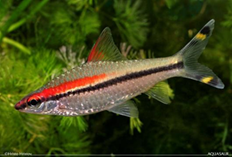 LOCATION: Freshwater fish, Originally from parts of western India. It’s been collected from the rivers Chaliar, Chalakkudipuzha and Kallada, the wildlife sanctuaries of Aralam and Periyar and in Kallada, Mundakayam and Travancore. Most of the ones seen in the trade today originate from the Khozikhode province of Kerala.

HABITAT: It lives in fast flowing highly-oxygenated rivers and loves to swim against the flow in tanks with high flow from powerheads.

DIET: Omnivorous. They should be fed a varied diet of flakes, small pellets and live foods such as daphnia and brine shrimp. Blood worms and brown worms can also be fed as a treat.

FACT: One of the most popular ornamental fish species in international trade. The most distinctive feature of this freshwater fish, however, is the black stripe that runs along the length of the body, as well as the striking red stripe that stretches from the snout to the middle of the body 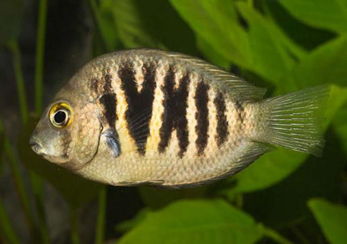 HABITAT: Freshwater streams, tributaries and estuaries .The substrate was mainly composed of small rocks and leaf litter with some tree roots projecting into the water along one margin.

DIET: Shy feeders that browse on aufwuchs on rocks and bogwood, and on morsels of food that have dropped to the bottom. Mine accept brineshrimp, Daphnia and bloodworm. They have recently started to accept flakes. As such they are unlikely to do well next to boisterous feeders.

FACT: These very shy, peaceful cichlids are initially tricky to feed.They have a nuclear family with protracted brood care lasting several months. The offspring feed on secretions from the flanks of the parents, rather like juvenile Discus. 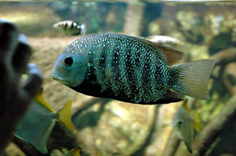 DIET: Omnivorous. Flake, green flake, and slow-sinking pellets/granules can be given, but frozen foods such as Spirulina-enriched brine shrimp, mosquito larvae, Mysis shrimp, krill, prawns. etc are preferred. It is important that these fish are provided with a good amount of vegetable matter such as blanched spinach, kale, Romaine lettuce, dried seaweeds etc.

FACT: A remarkable features of this family, is the development of the front part of the AIR bladder and corresponding changes to the posterior of the neurocranium(back part of the skull that houses the brain) to create a direct connection between the gas bladder and inner ear . This feature is not seen in any other Cichlid families. This allows fish of this genus to have remarkable hearing power.