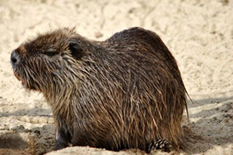 COMMON NAME OF THE SPECIE: Coypu

LOCATION: Originally native to subtropical and temperate South America, it has since been introduced to North America, Europe, Asia, and Africa, primarily by fur farmers. It may also be available in India

DIET: They eat the base of the above-ground stems of plants, and often dig through the organic soil for roots and rhizomes to eat

FACT: Nutria is covered with two types of fur. Outer coat is made of shaggy hair that can be yellow or brown in color. Next layer is made of fine, grey fur. This type of fur was very popular in fashion industry couple of decades ago. Nutria looks like a small beaver with long whiskers, short legs and hairless tail. Nutria has long incisors that are yellow to orange or orange to red in color.