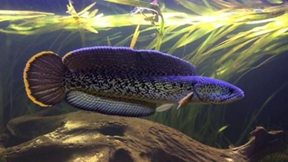 LOCATION: It is endemic to Northern Inda, in the Brahamputra river (northern Assam and Nagaland) in India,[1] and Sylhet in Bangladesh

FACT: Channa barca is best kept solitary or as a couple. To form a couple a group of young speciments should be kept until a couple has formed. When a couple has formed all other fish must be removed since they probably will be killed by the couple.

DIET: An obligate predator which probably feeds on smaller fishes, amphibians and terrestrial insects in nature but in most cases adapts well to dead alternatives in captivity.Young fish can be offered chironomid larvae (bloodworm), small earthworms, chopped prawn and suchlike while adults will accept strips of fish flesh, whole prawns/shrimp, mussels, etc.

FACT: marulius has a small head and a large mouth with some of the largest teeth of any of the snakehead species. The lower jaw supports 7 to 18 canine teeth behind a single row of villiform teeth that increase to five or six rows at the symphysis of the jaw . Teeth are present on the pre-vomer but are absent on the palatines..