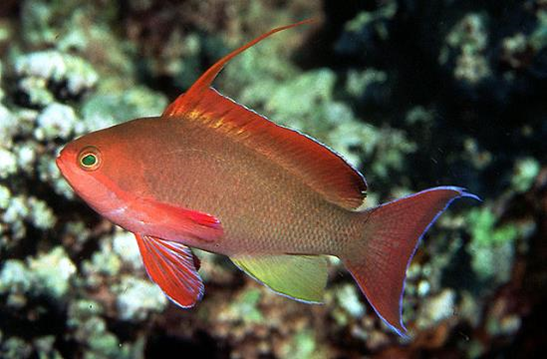 HABITAT: Pseudanthias squamipinnis occurs above coral outcrops, patch reefs of clear lagoons, channels, our outer reef slopes in large aggregations. This species is territorial and tends to stay within 20 m of their home rock or coral outcrop.

DIET: This species is a pelagic spawner and feeds on zooplankton

FACT: The midas blenny, Ecsenius midas, goes through a phase of yellow colouration and is a social mimic of the sea goldie. Females are induced to change sex by removal of males from social group. 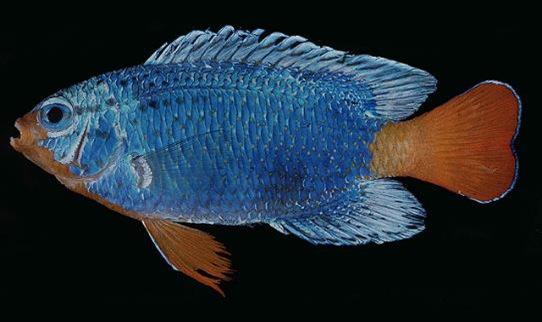 LOCATION: They are found throughout the Indo-West Pacific region; the eastern edge of the Indian Ocean, Western Australia to New Guinea on the northern portion of the Great Barrier Reef, Solomon, Mariana, and Caroline Islands, Indonesia, Philippines, Taiwan and Ryukyu Islands. They are also reported from Vanuatu and New Caledonia; Palau and Yap in Micronesia.

DIET: The Blue Damselfish are omnivores. In the wild they feed on filamentous algae along with tiny crustaceans, such as planktonic copepods and amphipods, and planktonic fish eggs. shrimp, vitamin-enriched brine shrimp, cyclops.

FACT: This species is dichromatic, with distinct color differences between the adult male and female. 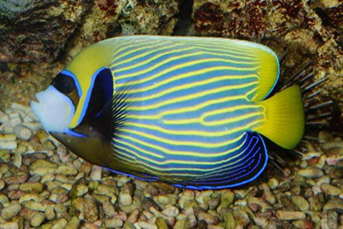 LOCATION: This species is widespread throughout the Indian Ocean and the western and central Pacific Ocean. It ranges from coastal East Africa and the Red Sea in the west to the Tuamotu Islands (French Polynesia), Line Islands (Kiribati and USA). It is a vagrant in the Hawaiian Islands (USA). Populations have been recorded as far north as southern Japan (including the Ogasawara Islands [=Bonin Islands] and Izu Islands) to the Great Barrier Reef (Australia), New Caledonia (France) and the Austral Islands (French Polynesia) in the south.

HABITAT: This species inhabits a wide variety of habitats with individuals usually reported from coastal and outer reefs, deep lagoons, often in areas of rich coral growth. It is commonly seen near ledges and caves. The juveniles usually occur under ledges or in holes on shallow reefs.

DIET: Emperor Angelfish are omnivores, in the wild they eat a wide variety of sponges and encrusting organisms along with small amounts of algae, tunicates, hydroids, and bryozoans.

FACT: It is one of the most favorite of photographers, artists, and aquarists because of its unique, brilliant pattern of coloration. 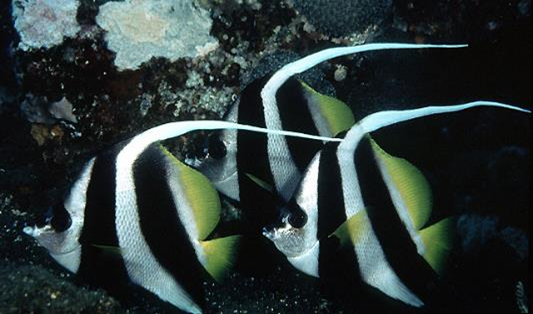 LOCATION: This species is widely distributed throughout much of the tropical Indo-Pacific region. It ranges from the East African coast and the Arabian Gulf in the west to the Society Islands (French Polynesia) in the east, and from southern Japan and the island of Taiwan in the north to Lord Howe Island (Australia) in the south.

HABITAT: This species is associated with coral and rocky reefs, and is often found in deep lagoon areas and outer reef slopes, although animals may inhabit shallower water in protected reef areas.

DIET: The Black and White Heniochus are omnivores. In the wild these fish are planktivores but will also eat benthic invertebrates. Eat parasites off of other fish, live brine, worms.

FACT: Its body is compressed laterally, the first rays of its dorsal fin stretch in a long white filament. 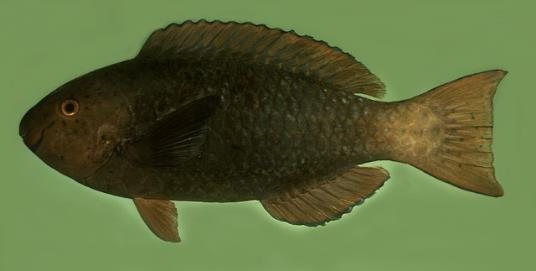 LOCATION: Scarus prasiognathos is distributed eastwards from the Maldive Islands through Indonesia to New Ireland in Papua New Guinea, and north to the Ryukyu Islands, including Palau and Micronesia.

HABITAT: Scarus prasiognathos is associated with the outer slope of coral reefs but will enter shallow water in protected areas such as lagoons.

FACT: These are oviparous in nature and have distinct pairing nature during breeding season. 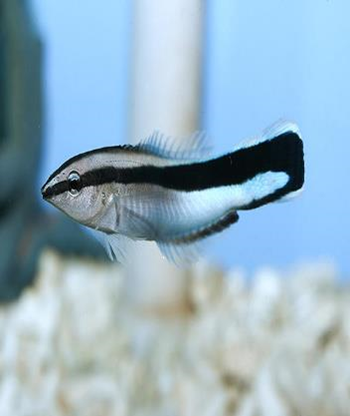 LOCATION: This species is found in the Indo-Pacific from southern and eastern Africa and the Red Sea to the Tuamotus in the south Pacific, and from southern Japan to the southern Great Barrier Reef and south-western Australia.

HABITAT: This species inhabits coral rich areas and subtidal reef flats to seaward reefs to depths of at least 40 m.

DIET: The Bluestreak Cleaner Wrasses are carnivorous. They obtain all or virtually all of their nutrition by consuming parasites dead tissues, mucus, and other debris from the bodies, fins, and mouths of other fish.

FACT: Cleaner Wrasses are peaceful attractive fish with a most intriguing "dance" that they perform to solicit clients (other fish) and to calm them, allowing the cleaners to remove parasites and other debris from their clients bodies, fins, and mouths.