LOCATION: It is found only in Lake Sentani and its tributary streams in the northeastern region of West Papua New Guinea (formerly Irian Jaya), near the city of Jayapura

HABITAT: Red Rainbowfish tend to gather around the margins of the lake where there is vegetation and bog type wood. The area they inhabit is fairly hilly so the streams tend to have very clear and rapidly moving currents

DIET: Red Rainbowfish are omnivores that usually eat a heavily meat based diet of bugs and insects, along with a variety of plant matter in their natural habitat. They require a high quality diet to promote good coloration.Some good live food options include bloodworms, tubifex worms, water fleas, or brine shrimp.

FACT: One of the larger rainbow fish species, Red Rainbowfish 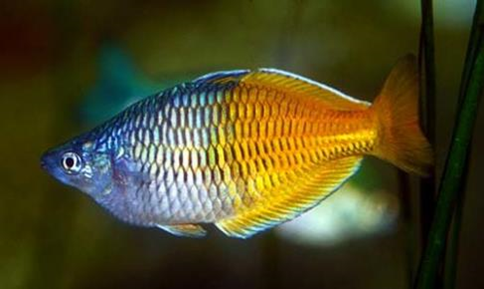 LOCATION: They are found in Asia, more specifically in the Vogelkop Peninsula of Western New Guinea (formerly Irian Jaya).

HABITAT: They are found only in the waters and tributaries of Lakes Ayamaru, Hain, and Aitinjo. They inhabit swampy shallow areas that are densely vegetated and feed on small crustaceans, insects, and some vegetation.

DIET: The Boeseman's Rainbowfish are omnivores and are opportunistic feeders in the wild, with a natural diet of small crustaceans, insects, and some vegetation. In captivity they should be given a high quality diet to encourage good coloration.

FACT: The secret to good colors is to keep quality specimens, feed a varied diet, and above all keep up with frequent water changes and maintenance. 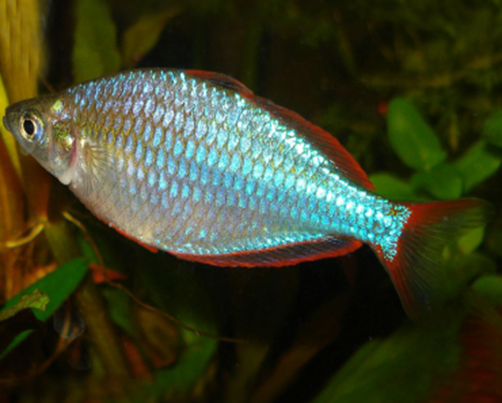 LOCATION: They are found in the small, lush jungle streams in Western New Guinea (formerly Irian Jaya), the Mamberamo region of West Papua.

HABITAT: The Dwarf Rainbowfish inhabit swift moving clear waters. These Rainbows usually live in water that stays around 75 - 82 degrees with a pH of around 6.5.

DIET: Dwarf Neon Rainbowfish are classic omnivores, quite equally adapted to eating both animal and plant matter in the wild.They also enjoy plant matter, so if you don't have any live plants for them to nibble on, consider giving them blanched lettuce leaves or a plant based food from time to time.

FACT: The Dwarf Neon Rainbowfish is an intelligent, beautiful and above all, a spirited fish. If kept healthy and happy these fish will always be active and amusing.