COMMON NAME OF THE SPECIE: Bluegill

LOCATION: The bluegill occurs naturally in the United States east of the Rocky Mountains from coastal Virginia to Florida, west to Texas and northern Mexico, and north to western Minnesota and western New York. Today they have been introduced to almost everywhere else in North America, and have also been introduced into Europe, South Africa, Zimbabwe, Asia, South America, and Oceania.

DIET: The very small mouth of this fish is an adaptation to eating small animals. Bluegills are carnivores, primarily eating invertebrates such as snails, worms, shrimp, aquatic insects, small crayfish, and zooplankton. They can also consume small fish such as minnows and plant material such as algae. Young bluegill eat worms and zooplankton, staying under cover while adults feed more in the open.

FACT: The largest bluegill ever caught was four pounds, 12 ounces in 1950. 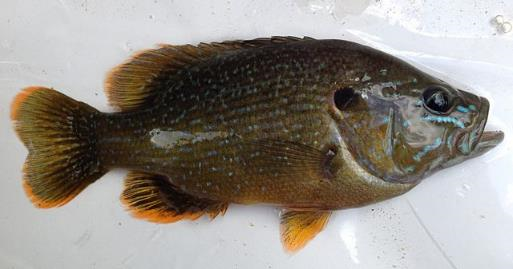 LOCATION: North America,Hudson bay in canada to gulf coast in US & North mexico

HABITAT: Lepomis cyanellus is a species with a wide tolerance to many different aquatic conditions, one reason why they have been successfully introduced elsewhere. They prefer smaller, sluggish streams and ponds, but can also inhabit lakes with weedy shorelines and slow rivers. They tolerate both turbid and clear water.

DIET: Green sunfish are dietary generalists. As juveniles and adults their diets expand to add small crayfish, fish eggs, insects, and small fish. It should be noted that, as competition decreases, their average prey size increases.

FACT: The green sunfish is said to have polarization sensitive vision not found in humans and other vertebrates