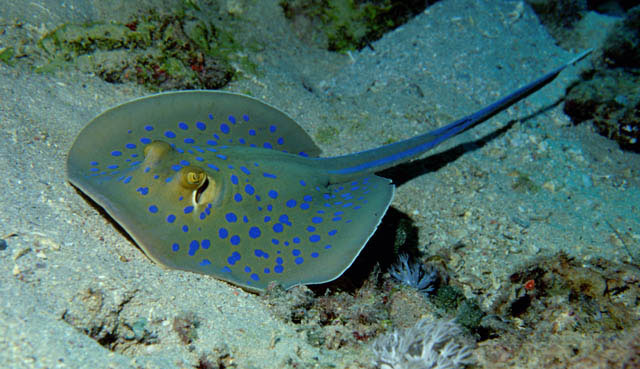 HABITAT: they are found in coral reef-associated habitats.

FACT: The blue-spotted ribbontail ray is recognised by its bright colour. It has two venomous spines, one large and one medium-sized, at the tip of the tail. The two spines are used to injure the enemy. It has bright yellow eyes that enhance its vision, enabling it to see behind it. Unlike many other stingrays, this species seldom buries itself in sand. The bluespotted ribbontail ray excavates sand pits in search of molluscs, polychaete worms, shrimps, crabs, and small benthic bony fishes; when prey is located, it is trapped by the body of the ray and maneuvered into the mouth with the disc.