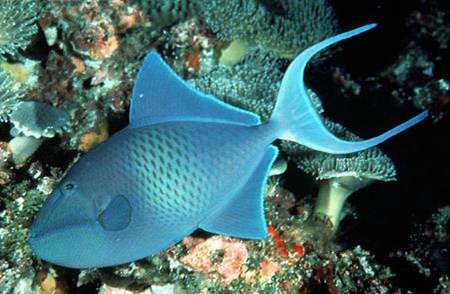 LOCATION: Blue Triggerfish are found in the Indo-Pacific: Red Sea south to Durban, South Africa and east to the Marquesas and Society islands, north to southern Japan, south to the southern Great Barrier Reef in Australia and New Caledonia

HABITAT: These fish Inhabit reef channels or along slopes that are subject to strong currents. Occur in current-swept seaward coral reefs.

DIET: Feeds on Zoo Plankton as well as sponges. They are carnivours,so eat many different types of meaty food. 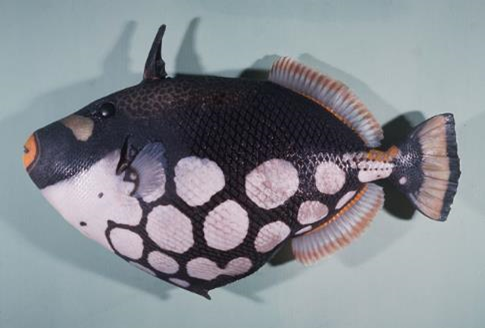 LOCATION: The clown triggerfish is widely distributed throughout the tropical and subtropical waters of the Indian Ocean until the western Pacific Ocean and western Atlantic Ocean from Florida the Caribbean and Gulf of Mexico

HABITAT: It is most commonly found along external reef slopes with clear water until 75 m depth. Juveniles are usually staying below 20 m sheltered close to caves or overhangs.

DIET: alistoides conspicillum has a varied diet based on different benthic organisms like molluscs, echinoderms and crustaceans.

FACT: The first long dorsal spine when is erected, it is used to impress an opponent or to avoid a predator to pull it out of its refuge. 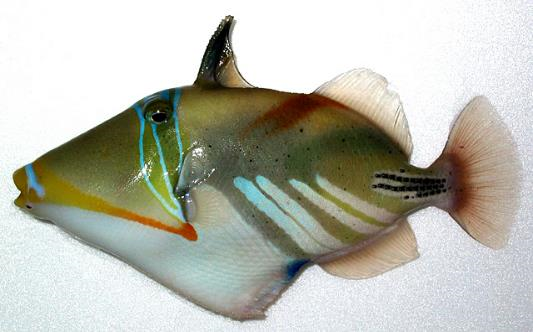 HABITAT: Commonly found in subtidal reef flats and shallow protected lagoons. Juveniles are secretive in rubble patches, adults swim about openly but are usually shy. They are a territorial fish.

DIET: In the wild they feed on algae, detritus, mollusks, crustaceans, worms, sea urchins, fishes, corals, tunicates, forams, and eggs. In the aquarium they should be fed all kinds of meaty marine foods, cut up fish, shrimp, squid, etc.