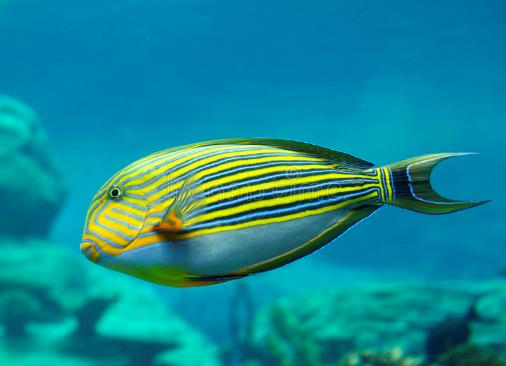 LOCATION: A. lineatus occurs in the Indian Ocean from East Africa to the western Pacific Ocean to the Great Barrier Reef, Japan, Polynesia,and Hawaii

HABITAT: The lined surgeonfish is associated with reefs, living in marine waters just a few meters deep. It is benthopelagic

DIET: The fish is mostly herbivorous, but might eat crustaceans at times. Most of its diet is algae. It grazes during the day

FACT: Surgeonfish have a blade like spine in the tail that points outwards when bent, unicorns have two hook-like plates along the tail, these are used for defence and are as sharp as a surgeons scalpel, hence the name "Surgeonfish". 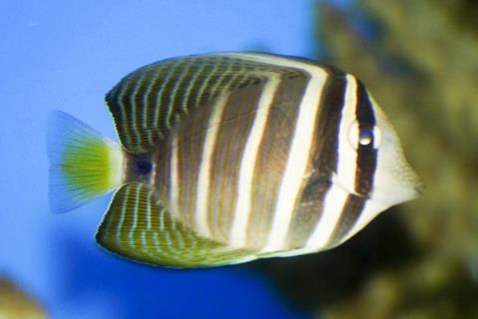 HABITAT: Zebrasoma veliferum is usually encountered as solitary individuals, on coral reefs from shallow protected areas to outer reef habitats at least as deep as 40 m. It grazes on algal turf.

DIET: The Sailfin Tangs are primarily herbivores. In the wild they feed primarily on leafy macroalgae algae. This genus can store fat in their body cavities so may go through periods of non-feeding.

FACT: When threatened, they can swim backwards at an enemy, raising these scales like a knife. 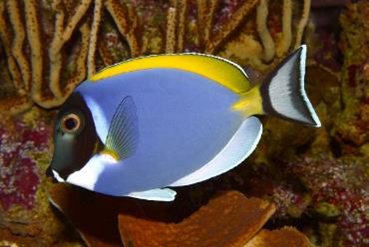 LOCATION: Powder Blue Tang are found in the Indian Ocean, from Africa to Indonesia. Swims at depths up to 25 meters.

HABITAT: Acanthurus leucosternon inhabits inshore reefs and is known to occur in large feeding aggregations. It is generally found on reef flats and along upper seaward slopes.

FACT: The pectoral fins are transparent with yellow reflections. The intensity of its blue color shows off if the fish is healthy or not. 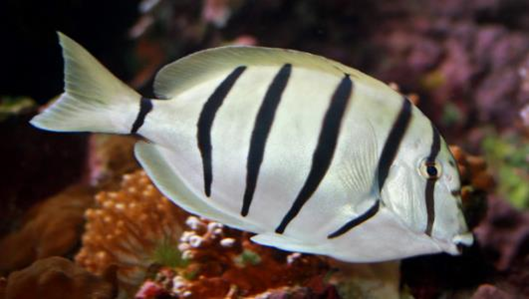 LOCATION: Found through out the indo -pecific region, as well as the eastern pecific ocean from the lower gulf of california to Panama

HABITAT: This reef-associated species occurs in lagoons and seaward reefs with hard substrate. It is usually seen in reef crests in shallow exposed reef fronts. The young are abundant in tide pools .

DIET: The Convict Surgeonfish are HERBIVORES In the wild they primarily graze on benthic weeds and algae, but will also eat small invertebrates, phytoplankton, algae, and some hard corals.

FACT: Unlike other surgeonfish, the male tangs from this genus are shown to be smaller than the females.