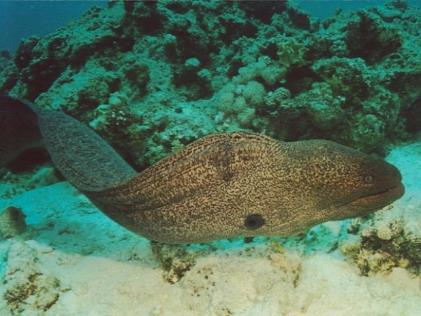 LOCATION: The giant moray is widespread in the Indo-Pacific region, being found from eastern coast of Africa, Red Sea included, until the Pitcairn group, Hawaiian islands and also Polynesia. North to south Japan and south to New Caledonia, Fiji and the Austral Islands.

HABITAT: It lives in lagoons and on the outer slopes of coral reefs, during the day it sits sheltered in crevices between 1 and 50 meters deep.

FACT: This specie may be hazardous to people . Being at the top of the food chain, it is likely to cause ciguatera poisoning if eaten.Ciguatera fish poisoning into a (CFP) is most freaquantly reported sea food - toxin illness in the world & it causes substainsioally physical & functional impact