LOCATION: The Whitetip Reef Shark is wide ranging in the Indo-Pacific. It occurs along the east coast of Africa from South Africa to Red Sea, Indian Ocean islands, northern Indian Ocean, including India, Sri Lanka, Myanmar, Vietnam, the Philippines, Australia, New Guinea and Polynesia, Melanesia, Micronesia to the Hawaiian Islands and Pitcairn group. The species is also found in the eastern Pacific, Cocos Islands, Galapagos and Panama to Costa Rica.

DIET: Carnivore. Crab, lobster and octopi off the sea floor, but its primary source of food is several types of boney fishes including but not restricted to damselfish (Pomacentridae), parrotfish (Scaridae), surgeonfish (Acanthuridae), goatfish (Mullidae), triggerfish (Balistidae), squirrelfish (Holocentridae) and eels (Anguilliformes).

FACT: Whitetip reef sharks are rarely aggressive towards humans, though they may investigate swimmers closely. The lever of this shark has been reported to be toxic. 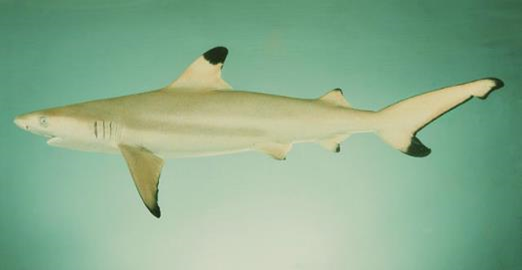 LOCATION: Blacktip Reef Shark is a common tropical Indo-West Pacific and Central Pacific species with a range extending from Thailand to China, Japan, the Philippines, New Caledonia and northern Australia. Blacktip Reef Sharks have been reported from many Pacific Islands including: the Marshall Islands, the Solomon Islands (Blaber and Milton 1990) the Gilbert Islands, the Society Islands south to the Tuamotu Archipelago and also the Hawaiian Islands. The species is also present in South Africa, Mauritius, Seychelles and Madagascar to the Red Sea, Pakistan, India, Sri Lanka, Andaman and the Maldive Islands. This shark has also penetrated the eastern Mediterranean Sea, probably via the Suez Canal from the Red Sea.

HABITAT: The Blacktip Reef Shark is commonly found in shallow waters on and near coral reefs. This species is often seen in water only a few metres deep and is occasionally present in brackish waters.

FACT: Among the most abundant sharks inhabiting the tropical coral reefs of the Indian and Pacific Oceans, this species prefers shallow, inshore waters. The denticles of blackreef shark are tooth like in structure and embedded firmly in the skin.

LOCATION: The Zebra Shark is found in inshore waters of the continental and insular shelves of the Western Pacific and Indian Oceans.

HABITAT: The Zebra Shark occurs in tropical and subtropical, shallow inshore and offshore waters, often found on and around coral and rocky reefs and on sandy plateaus near coral, at depths down to at least 62 m. They are often observed resting on the bottom as well as swimming near the surface as both juveniles and adults.

DIET: Zebra sharks are omnivorous animals but tend to have a more meat-based diet. Zebra sharks feed on small fish, crabs, shrimp, snails and other small invertebrates along with squid and sea snakes which they forage for in the coral reefs

FACT: Zebra sharks are nocturnal and spend most of the day resting motionless on the sea floor. At night, they actively hunt for molluscs, crustaceans, small bony fishes, and possibly sea snakes inside holes and crevices in the reef.