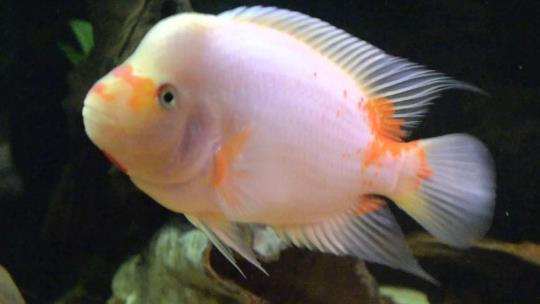 LOCATION: The Midas Cichlid are found in Central America near the Atlantic slope. They are mostly found in lakes of Costa Rica and Nicaragua, such as Lake Apoyo, Masaya, Nicaragua and Manaua, and on rare occasions in the slow flowing areas of rivers.

HABITAT: Tends to inhabit large, permanent bodies of water including lakes and ponds, although it’s also been recorded in slow-moving parts of rivers. It particularly favours rocky walls and banks, where it forages among the crevices.

FACT: The Midas Cichlid Amphilophus citrinellus (previously Cichlasoma citrinellum) is a large, eye-catching, and gorgeous show specimen. The coloring of the wild Midas Cichlid is a naturally camouflaging dark brown, gray to blackish body with six dark bars and a large black blotch on the side. LOCATION: They are found in Central America on the Pacific slope from Costa Rica to Guatemala and on the Atlantic slope from Honduras to Panama. These fish have been introduced to many areas in the United States

HABITAT: It is found in a wide variety of environments from flowing waters of rivers to ponds and lakes. It is almost never found in open water, though, preferring to stay in areas containing cover in whatever form.

DIET: It will readily eat a wide variety of foods including: foods manufactured for omnivorous cichlids, vegetable based foods with spirulina, blanched lettuce or other veggies, beef heart and worms. Feed 2 to 5 small pinches of food a day in smaller amounts instead of a large quantity once a day.

FACT: they are known for their tendency to attack almost any other fish in their territory, including fish up to three times their size! Their name, Convict Cichlid, originates from the broad, dark vertical lines running down their body, making them similar in apperance to the traditional "jailbird" outfit. LOCATION: They are found in northern South America.

HABITAT: They inhabit ponds and the fresh and brackish waters of river mouths on both the Pacific and Atlantic Ocean slopes.

DIET: Although Plecostomus are omnivorous, the bulk of their diet is algae. They will eat undesirable algae and will generally not harm plants. Provide an aquarium that is well established with lots of natural algae growth. Also feed supplements including algae wafers, green foods and sinking pellets to make sure they don't starve. It is best to feed them in the evening just before turning out the lights. Note: they have not been observed to eat blue algae.

FACT: The Plecostomus is a very hardy fish that loves to eat algae, especially when young!The Pleco is an unusual fish in body shape with its underslung suckermouth, tall dorsal fin and moon-shaped tail fin. It can also roll its eyes in there sockets, making it look like its winking.