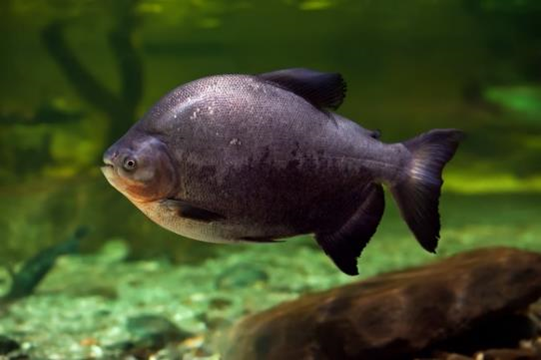 LOCATION: It is native to tropical South America, but kept in aquaculture and introduced elsewhere.

HABITAT: Black Pacu are solitary fish. As juveniles, they live in the black waters of flood plains, feeding on insects, snails, and decaying plant matter. Adults move to flooded forest areas during the initial months of the flood season and feed on fruits and grains. Fin nipping is also a common method of feeding among juveniles and young adults.

DIET: The Black Pacus are omnivores. In the wild, they will consume fruits, grains, insects, snails, detritus, and plant matter. In the aquarium, they will readily eat most anything and can be offered frozen foods as well as a pellet diet. Aquarium-kept specimens may also eat fish, so make sure that any of the Black Pacu's tankmates are considerably larger than its mouth.

FACT: The Black Pacu Colossoma macropomum, also known as the Tambaqui, is a characin just like such favorites as the Neon Tetra and the Glolight Tetra. However, that is where the similarities end. This fish is the largest characin found in South America and barely resembles most of its characin cousins. 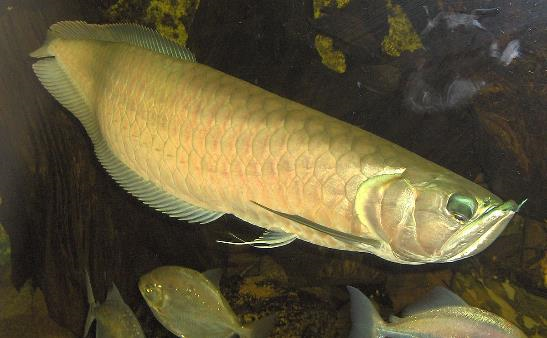 LOCATION: The Silver Arowana are found in white and black water floodplains of South America.

HABITAT: The silver arowana occurs in both black- and whitewater habitats, including flooded forests

DIET: Is an omnivore with a tendency to feed on fish at the surface. The superior position of the mouth allows it to capture its prey while swimming from below. Also jumps out of the water to feed on large insects

FACT: It is capable of adapting to environments with low oxygen levels 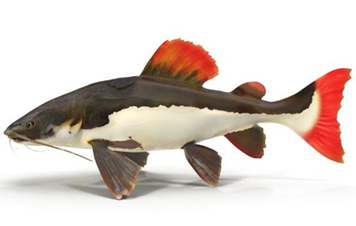 LOCATION: Found in Venenzuela and Brazil

HABITAT: These catfish are only found in freshwater and occur in a broad range of habitats. They can be found in rapids to areas of flooded forest but prefer deep pools in rivers. In nature they will normally consume other fish, crabs, crustaceans, fruits, and seeds that fall into the waters. They are a solitary fish, territorial with their own kind as well as other catfish from the Pimelodidae family,

DIET: Red-tailed Catfish are omnivorous but prefer meaty foods. They will generally eat all kinds of live, fresh, and flake foods. As they grow go offer higher percentages of pellets, live or frozen foods, and fruits. Be cautious as these fish will and can eat anything that fits in their mouth, including filter parts and heaters.

FACT: This catfish gets really big. They can reach 3 feet or more in captivity and there are reports of specimens reaching up to 5 feet in the wild. Because of their large size they are a favorite game fish and anglers love them. 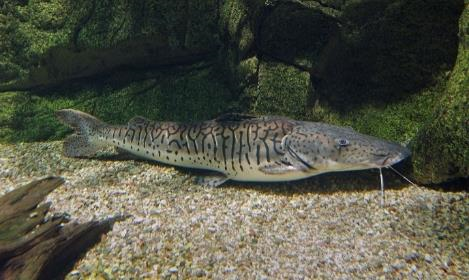 HABITAT: Inhabits a vatiety of biotopes, from large rivers and lakes to areas of flooded forest. Supposedly it’s often found in more sluggish habitats than many large Pimelodids

DIET: Piscivorous by nature, but usually adapts well to dead foods in captivity. It relishes meaty items such as prawns, mussels, cockle, lancefish or earthworms.

FACT: Estimated egg laying capacity of 1 kg of fish is about 8 million eggs

COMMON NAME OF THE SPECIE: Arapaima

HABITAT: The exact habitat of these fish is unknown. It has been reported to be in the Essequibo basins and fossils have been found in the Rio Magdelena basin in Colombia. These fish have been most recently been introduced in Eastern Asia

DIET: The Arapaima are carnivores, a predator that mainly eats other fish. They will also eat animals or birds if they are near by. They are known to jump out of the water to snatch a small bird off of low-hanging tree branches. In captivity they can be fed smaller fish, chopped up meaty foods, crustaceans, pellets, and prepared foods such as krill and plankton.

FACT: They are fast growers and powerful swimmers. They are a predator that mainly eats other fish. They will also jump out of the water to snatch small birds from low hanging tree branches. Because of their large size and food requirements, they are not really a good choice as a home pet for most aquarists.Largest fresh water fish in the world.