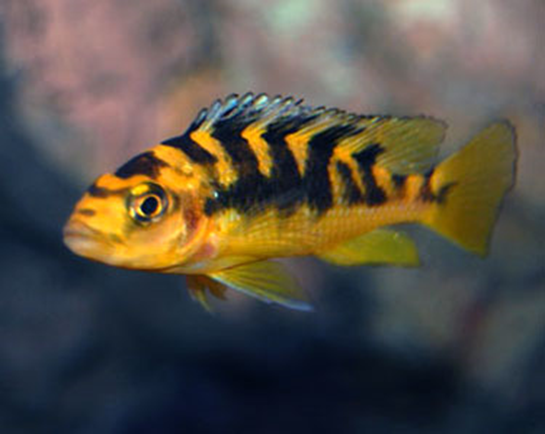 LOCATION: They are found in Lake Malawi, Africa at various sites in the Eccles Reef, West Reef, Chiyamwezi, Mbenji, Chinyankwazi, Maleri, Nkata Bay, and the Likoma and Chisumulu Islands

HABITAT: .They live in various habitats but prefer rocks or sand-rock substrates near large boulders, and the interior of large caves.

DIET: The Bumblebee Mouthbrooder is an omnivore with a voracious appetite. In the wild they feed on a different foods as they are available including benthic crustaceans, fry of other fish, fish eggs, larvae, and parasites they pick off of a catfish. In the aquarium feed high quality flakes, pellets, spirulina, and prepared cichlid foods. They do need more proteins than other Mbunas because of their natural diet, but they still need vegetable matter to provide fiber in their diet in order to keep their intestinal tract disease free.

FACT: Cichlids have one nostril on each side while other fish have 2 sets. They are also known for their ability to rapidly change its colours. 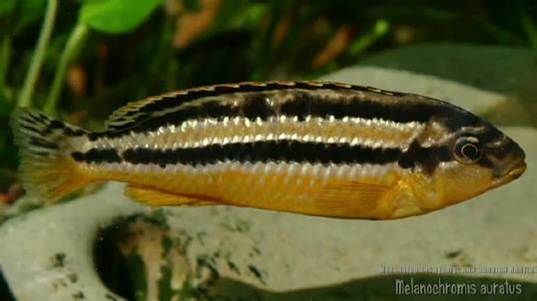 LOCATION: They are endemic to the rocky shoreline of Lake Malawi, Africa.

HABITAT: These fish occupy the southern part of the lake from the Jalo Reef and then north of Nkhota Kota, and south along the western coast to Crocodile Rocks.

DIET: The Auratus Cichlid is an omnivore but has a very herbivorous diet in nature, so may eat any plant you put in the tank. They need to be fed small meals of dry, fresh and frozen foods that are rich in vegetable matter several times a day. Spirulina is highly recommended as a staple food. These foods will help keep the colors bright.

FACT: The Auratus Chilid have opposite coloring based on their sexes which makes them desirable, but while females are moderately aggressive with tankmates, males are highly intolerant. 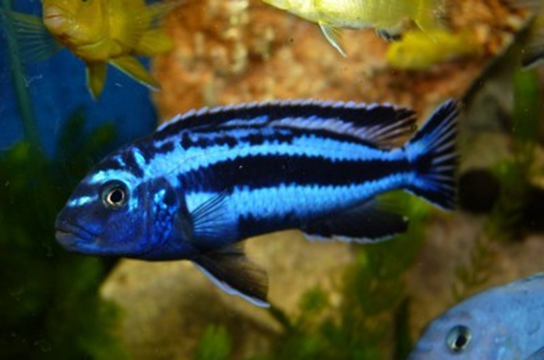 COMMON NAME OF THE SPECIE: Maingano

LOCATION: They are endemic to Lake Malawi, Africa were they are found at Likoma Island between Mbako Point and Membe Point.

HABITAT: They are commonly found over small and medium sized rocks at depths between 10 - 33 feet (3 - 10 m). They feed on zooplankton, epibenthic invertebrates, and Aufwuchs. Aufwuchs refers to tough stringy algae that is attached to rocks.

DIET: The Maingano is an omnivore that feeds on zooplankton, epibenthic invertebrates, and Aufwuchs in nature. They will accept frozen or live brine shrimp, mysis, high quality flake, pellets, spirulina, and other preparations for omnivore cichlids.

FACT: Pseudotropheus cyaneorhabdos is one of the cichlids which as a group are called Mbuna which is an African word meaning rock dweller. All the Mbuna come from just one lake in the East African Rift Valley, Lake Malawi.